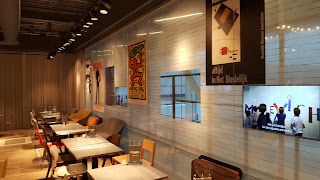 A transfer at Amsterdam's Schipol Airport gave me some time to explore. I believe that the terminal has been remodeled since my last visit. Upstairs, I found Frames, an outpost of Amsterdam's modern art restaurant. The location is out of the way and less hectic than the busy space below. The space has an urban hip feel and jazz plays over the speakers. Overall, a very nice feel.

I started with a capuccino that was artfully prepared. 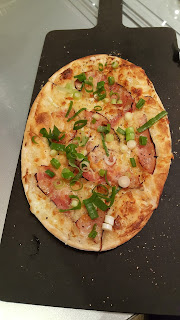 For my main purpose, I ordered this flammkuchen, a traditional Dutch snack. The flatbread is covered with sour cream; mine also had a little ham. The crust was very nicely prepared with a bit of crunch. The sour cream enriched the crust without making it overly soggy. 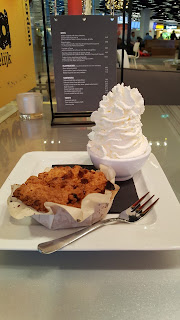 I finished up with a piece of apple pie. As the waiter brought it, he announced, "I heard you like whipped cream!" The pie was great with a delicious crust and good apple flavor. The whipped cream was also great and, of course, I ate the entire mountain.