Update: One Flew South at ATL 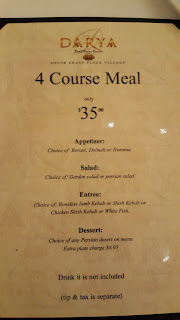 Thanksgiving is a hectic time of year to fly. For those of you traveling this year, the traffic into ATL's south terminal was backed up for perhaps a mile, and it's only Tuesday. I thought that a nice meal would be a good way to prepare me for a long trip. I headed to One Flew South in Terminal E. It is very well known as great food, not just airport food. I haven't visited here in quite some time. 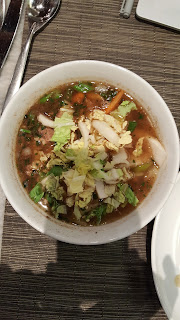 My chicken soup proved to be a delightful surprise. I had naively assumed that the soup would be close to the traditional Southern comfort food. It was, in fact, a mix of influences. The noodles were thin Japanese noodles, which makes sense given their large sushi menu. The great broth thin, not thickened as is traditional, and was spiced with cardamom, a very bold choice that worked well. The soup and my main course were delivered at the same time, but I guess they do that to be sure that patrons can finish in time to make their flight. 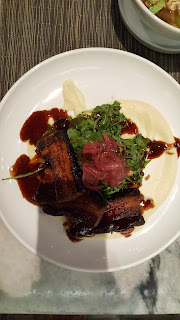 The pork belly had a hint of Japanese in the sauce but hewed closer to Southern tradition. It was succulent with just a bit of doneness around the edge. The belly had plenty of meat and I sure loved that fat. Great food and very gracious service prepared me well for my trip.