January 27, 2018
I was in the mood for dinner at home. I wanted to sit in front of a plate and enjoy a meal. A chicken dinner seemed like the obvious choice. 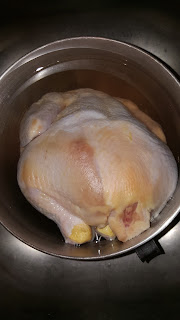 I brined the chicken overnight in pickling salts. 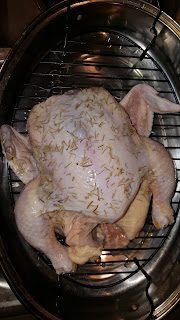 I then stuffed some rosemary under the skin and in the cavity. Some ended up on the skin as well, which of course doesn't do much more than burn when I roast the bird. Then into the roasting pan it went. In an ideal world, I would have rested the bird on a bed of root vegetables, but I had only a few which I wanted to save for later. 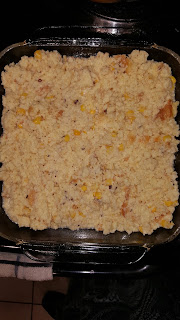 Meanwhile, I prepped a batch of corn pudding, making use of a frozen loaf of cornbread I had made a week before. The recipe simply follows a bread pudding but substitutes cornbread and corn for bread and raisins. I added the corn pudding to the oven to cook alongside the chicken. 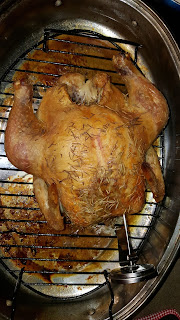 I pulled both the chicken and corn pudding out of the oven at the same time. I left the chicken to cool for a few minutes. 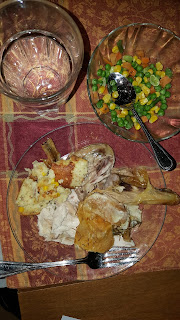 I finally plated the meal: chicken, corn pudding, and some mixed vegetables from the freezer. The plate made for a comforting, pleasant meal. 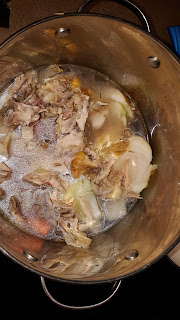 I didn't want to waste the leftovers. I froze the remaining chicken meat for later meals. I used the carcass, along with what root vegetables I had in the refrigerator, to make some stock that I could use in all sorts of unplanned ways.