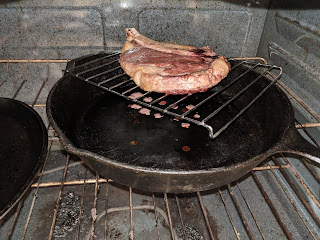 Serious Eats has posted several articles on reverse-seared meat so I decided to give it a serious try. The idea is to cook the meat through first at low temperature, then sear it at the end. The result should be more even cooking plus a nice sear on the outside. I put my ribeye into a 250 degree oven and measured its temperature with my thermometer. I overshot the temperature a little bit but had it roughly in the medium rare range. 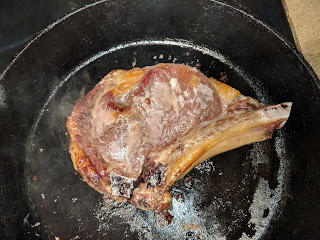 I then put it in a pan on the stove to sear on both sides. 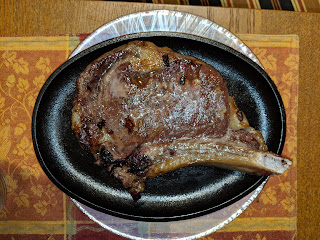 Here it is ready to eat. I didn't sear it quite as much as I would like. I was concerned about overcooking the meat during searing. I think that successful use of this technique requires a very hot searing environment to quickly prepare the surface before the heat has a chance to penetrate. Oh well, it was still a good steak.