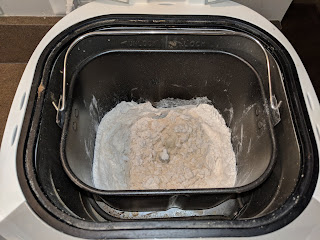 I was in the mood to put some of my peach preserves to work in a coffee cake. I decided to try a different style, this time based on a croissant dough, as suggested by the King Arthur cookbook. The process starts with an egg yeast dough. As you can see, this is a wet, sticky dough. 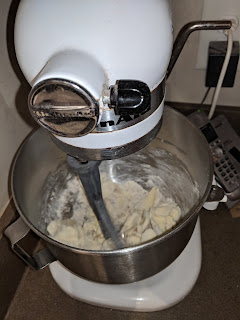 As the dough was rising, I worked on the butter. The croissant technique mixes flour with butter to make the butter more pliable. I also added some pecan pieces. 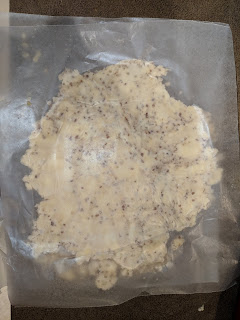 I rolled out the butter mixture between two sheets of wax paper. (Remember wax paper? It still has its uses.) I put the sheet in the refrigerator for a few minutes to chill and harden. 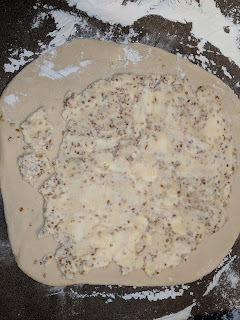 Once the butter was firm, I rolled out the dough and placed the butter sheet on top. 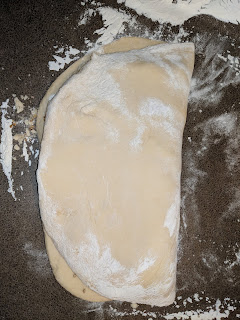 I then folded the assembly once... 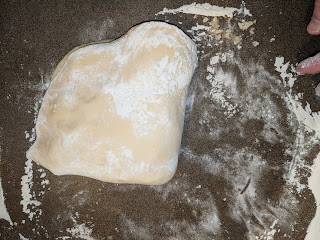 ...and again in the perpendicular direction. I rolled out the dough to press together the folds then let everything rest. This process builds thin sheets of butter that crispen the dough as it bakes. I performed this operation four times, three times with a chilled rest and once at room temperature. The room temperature step allowed me to more thoroughly roll together the sheets to maximize incorporation. 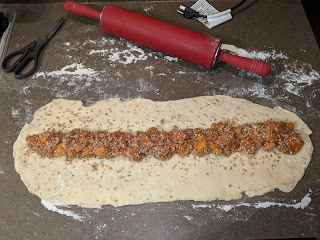 After these rounds of rising and folding, I rolled the dough into a long, thin sheet. I prepared a mixture of peach preserves and pecan pieces as the filling. 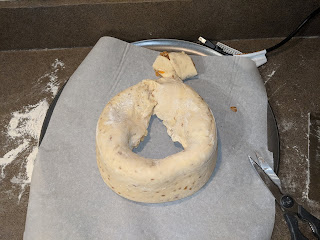 I rolled up the assembly, then lifted it onto the pan and turned it into a circle. 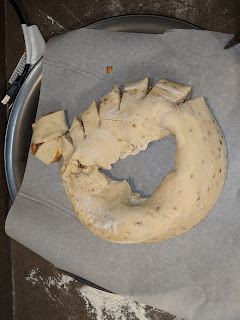 I cut a series of vents into the circle using kitchen scissors. I coated the assembly first with egg whites and nutmeg, then a final coat of honey. 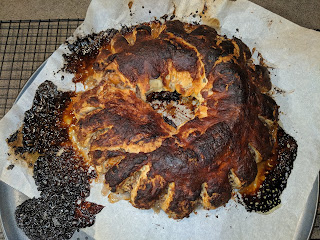 Here is the result. That dark brown finish is thanks to the egg white wash. Everything about this coffee cake was delicious: the bread was soft and rich; the peach preserves gave real peach flavor; the pecans gave a touch of early flavor and nice textural contrast.