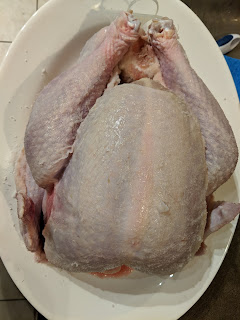 I decided to cook a turkey for Thanksgiving eve, a simple way to appreciate a dinner at home. I picked up a nice fresh turkey from Tucker Butcher Shop. I dry-brined it the night before by rubbing it with salt. 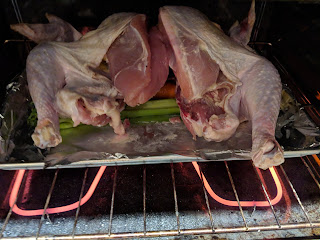 I spatchcocked the turkey, cutting out the backbone and flattening it on a pan. Unfortunately, in my excessive enthusiasm I also cut the breastbone in half. The turkey rested on a bed of carrots and celery. 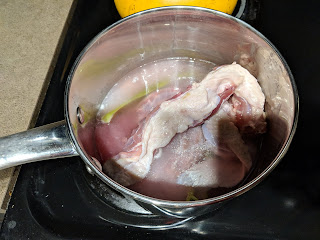 I put the backbone and a few other small parts into a pan along with water and a few vegetables. 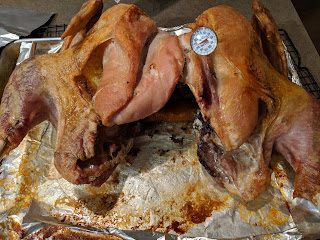 A few hours later, the turkey was done. My cut of the breast left its edges drier than I would have liked, but the center was nicely moist. The crust was very crispy. The dry brine gave the bird a distinct salty taste, something I liked but something to consider when considering the technique. Once I carved the meat off the turkey, I used the bones and vegetables to make a batch of turkey stock. 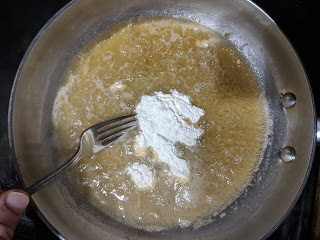 Some turkey drippings went into a pan to create a roux, followed by the impromptu turkey stock. 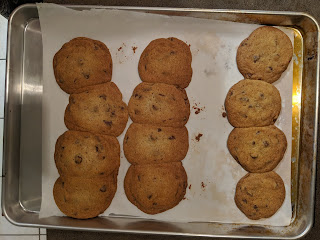 While I had the oven on, I made a quick batch of chocolate chip cookies.