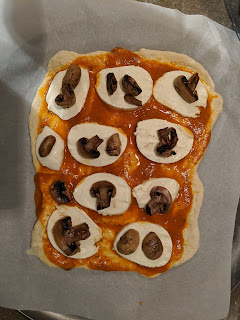 My most recent pizza making experience led me to an interesting technique. I made a batch of pizza dough, yielding enough for two pizzas. I originally planned to save half for a later day so I put one in the refrigerator and left out the other for a few hours to rise. My stretching technique resulted in this misshapen blob, typical of my previous efforts. I cooked and ate the pizza, then decided to try one more time. 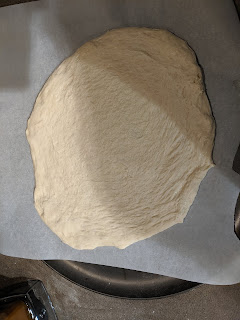 The dough was cold after its time in the refrigerator. Cold dough doesn't sag and is much easier to stretch into a regular shape. I had read about this technique before but its importance hadn't sunk in. I probably could have made this dough both larger and rounder but I was so happy with my success that I decided to declare victory. 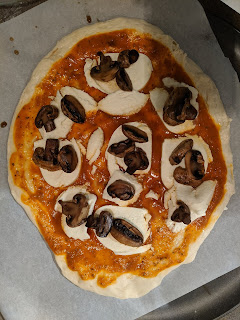 The result was this very pleasing pizza. The pizza guys in New Jersey don't need to refrigerate their dough but they have both talent and skill. Since I have neither, I plan to refrigerate my pizza doughs from now on.