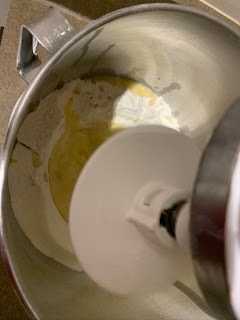 My first thoughts for a special Christmas morning went to sweet rolls. But I eventually decided to make croissants, something that I make even less often than sweet rolls. I used the baker's croissant recipe from King Arthur Flour with some variations. First, I made a half recipe, a slightly risky step given the particular ratios required for croissants. Second, I used bread flour because I was low on all-purpose. I started by kneading the dough, or at least letting the Kitchenaid do it for me. 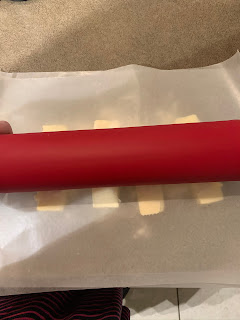 While the dough was worked I prepared the butter sheets. I split two sticks of butter, placed them between sheets of wax paper, and added a little flour. (Wax paper is an oldie-but-goodie that still comes in handy.) I rolled out the butter to make sheets. 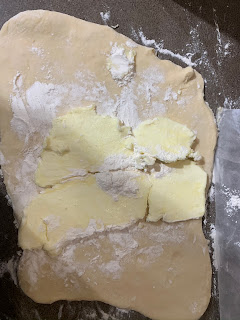 Once the dough was properly kneaded I rolled it out and added part of the butter sheet. I folded the result in thirds and added more butter, then repeated one more time. 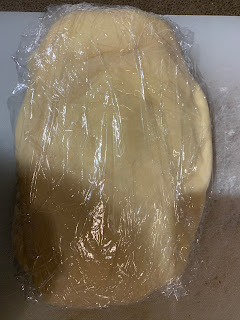 I wrapped the dough in plastic and let it rise in the refrigerator. I took it out two more times to roll and fold into thirds, now without adding more butter. This process leaves thin, small sheets of butter throughout the dough. They melt during cooking, creating the crispy-and-soft texture of the croissant. 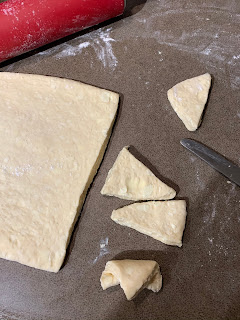 I then shaped the croissants: I rolled the dough out, cut into triangles, and formed croissants. The triangles were small given the quantity of dough in the half batch; a full batch would have let me cut larger triangles that would be easier to shape into proper croissants. 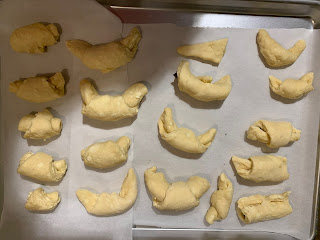 I added chocolate bits into a few of them. I put the tray into the refrigerator overnight. 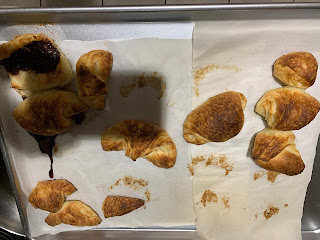 On Christmas morning, I froze a few croissants and baked the rest. The result was delicious. The bread flour worked well, probably a little breadier than if I had used all-purpose flour. The outside was crispy and nicely browned. The interior was flaky and buttery---so many factory croissants don't give that buttery taste. Add a cup of coffee for a relaxing start to Christmas. Happy holidays to all! May the world find peace, if only for a moment.